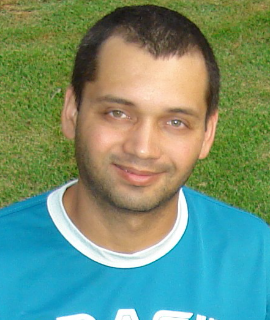 Title : A Bridging Centrality plugin for GEPHI and a case study for Mycobacterium tuberculosis H37Rv

Bridging Centrality (BriCe) is a popular measure that combines the Betweenness centrality and Bridging
coefficient metrics to characterize nodes acting as a bridge among clusters. However, there were no implementations of the BriCe plugin that can be readily used in the GEPHI software or any other software dedicated to graph-based studies. In this paper, we present the BriCe plugin for GEPHI. It is available as a third-party functionality from the native GEPHI interface as a handy plugin to add; hence, no additional download and installation process is necessary. The BriCe plugin for GEPHI is open-source, and one can access the code through the GEPHI GitHub repository. As a use case of the BriCe plugin, we analyzed the genome of Mycobacterium tuberculosis H37Rv to identify biological explanations on why some proteins were ranked with top BriCe values? For instance, we were able to formulate a new hypothesis combining the predicted sub cellular localization and high BriCe values concerning lipopolysaccharides (LPS) exportation. Our hypothesis provides a possible link among proteins of a glycosyltransferase group and the type VII Secretion System. The Bridging Centrality plugin for GEPHI is an easy to use tool for analyzing complex graphs and draw novel insights from graphical data. Moreover, for situations where there is no reliable interaction network for your genomes of interest, we developed GENPPI software for the ab initio prediction of interaction networks using predicted proteins from a genome. In our case study, we employed 50 genomes of the genus Corynebacterium. Based on the PP relationship, GENPPI differentiated genomes between the ovis and equi biovars of the species Corynebacterium pseudotuberculosis and created groups among the other species analysed. If we inspected only the CN relationship, we could not entirely separate biovars, only species. Our software GENPPI was determined to be efficient because, for example, it creates interaction networks from the central genomes of 50 species/lineages with an average size of 2200 genes in less than 40 min on a conventional computer. Furthermore, the interaction networks that our software creates reflect correct evolutionary relationships between species, which we confirmed with average nucleotide identity analyses.
What will audience learn from your presentation?
The audience will be able to use the methodology explained in my presentation because I published and open-sourced both software tools. Moreover, the software is handy, has plenty of documentation, and I comprehensively explained it. The first one is a GEPHI plugin to analyze interaction networks in the light of bridging nodes for bacterial proteins (Bridging centrality) (Pereira et al., 2021). The second one is a software tool called GENPPI to generate interaction networks if a particular one is not available in public databases (Anjos et al., 2021).
To spot conserved interaction among proteins in a bacterial genome can be crucial to focus on the leading vaccine and diagnosis candidates against infectious diseases like Tuberculosis or Diphtheria, both reemerging
diseases.
Anyone can access and use these tools freely, so our methodology is reachable to everyone. We can think about our method to find target proteins against infectious disease agents as a complement to reverse vaccinology (RV). Besides the classical RV, we extend the search dimension, including a topological one. We can use several topological measures. However, we need to find a link between topological statistics and their biological meaning. We have no difficulties explaining the relationship between the Bridging centrality statistic and its possible meaning for bacterial infection agents' proteins. Our method of generating and analyzing both interaction networks and potential candidates for vaccine and diagnosis could shed light on the difficult task of selecting a few promising proteins for further studies. We offer not only a pool of exported proteins or the more immunogenic ones but a new point of view: proteins evolutionary correlated as bridging among clusters of related molecular processes.
Likewise, as long a researcher starts using our method, many other possibilities are over the board. For instance, to study hub proteins (highest Degree Centrality), more traversed (Betweenness Centrality), peripherical ones (inverse of highest Degree Centrality), proteins present in the bulkiest connected component, and more. In this new scenario, the imagination and knowledge of a researcher are the limits for further insights.

Anderson Santos graduated in Computer Science (1995), Masters in Computer Science with an emphasis in Artificial Intelligence (1999), and a Ph. D. in Bioinformatics (2012). Significant participation in the assembly and annotation of the first genome project conducted entirely in the state of Minas Gerais (Brazil) about the bacterium Corynebacterium pseudotuberculosis and experienced in the use of Computer Science for assembly and annotation of genomes. I also
have practiced coordinating multidisciplinary teams for the assembler, annotation, and analysis of several bacterial genomes. I have been a professor at the Federal University of Uberlândia, Faculty of Computing, Brazil, since 2013.